Get the inside scoop from the developers on the Multiclass system, the environments you'll explore, quest design philosophies, and more!
1/31/2022

Check out the Spore Warden and Graveborn classes for the Fatemaker in the newest Welcome to the Wonderlands trailer above!

When you sit down at Tina's table for a Bunkers & Badasses campaign, the majesty of all the Wonderlands is at your fingertips. With so much to see and do throughout the Overworld and the many realms therein, you may find yourself constantly stopping to smell the mushrooms or even momentarily forget all about that tyrannical Dragon Lord and his villainous machinations. But before you can begin your adventure full of the shooty, casty, stabby, and loot-picky-uppy, you'll want to think hard about the two classes that will define you as the Fatemaker. How will you harness the Multiclass system to build the most badass fantasy hero imaginable?

Of course, figuring out the ideal combination of classes for your Fatemaker is only the beginning of your journey, which will take you across every corner of the Wonderlands, from the fantastical to the fearsome and even the downright freaky. In this installment of the Tiny Tina's Wonderlands Dev Diary series, we're digging into the foundations of the Multiclass system, then casting our gaze to the horizon full of wondrous landscapes and the quests that populate them. 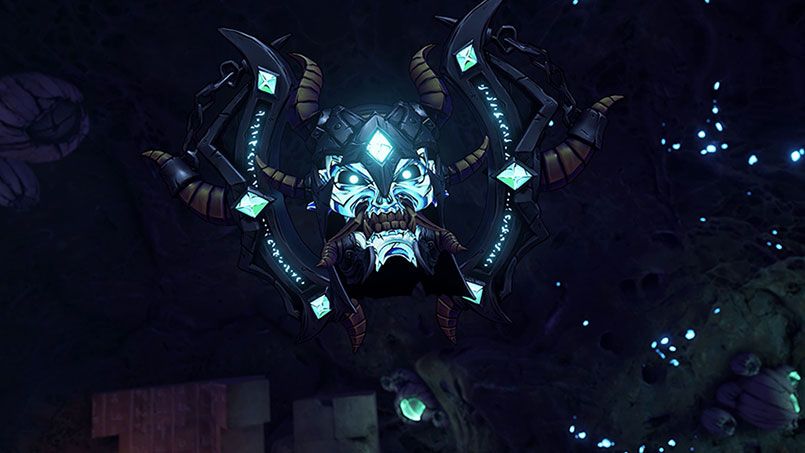 Before you set foot into the Wonderlands, the very first thing you'll do is choose a starting class for your Fatemaker, be you a Brr-Zerker, Stabbomancer, Clawbringer, Spellshot, Graveborn, or Spore Warden. This will be your primary role from the onset of your adventure, but thanks to the Multiclass system, you'll eventually have your choice of a secondary class when you've progressed far enough in the campaign. Each class has its own always-on Class Feat, a skill tree full of passive benefits, and two iconic Action Skills to choose between. Class Feats are a reflection of each class' core fantasy; for instance, the deft and agile Stabbomancers have increased critical hit chance, while Clawbringers have a Wyvern Companion that flies around slashing enemies with its talons and roasting them with fire breath.

Selecting two roles for your multiclass combination is an essential trait of being the Fatemaker, but you still have full control over how you want to balance between them. Perhaps you'll be a dedicated Brr-Zerker with a splash of Stabbomancer trickery, a Graveborn/Clawbringer pack leader with two companions always at your side, a poison-empowered Spore Warden with the Spellshot's elemental magic in each hand, or any other combination you can conjure up.

There are also six basic stats (Strength, Dexterity, Intelligence, Wisdom, Constitution, and Attunement) you can spend Hero Points on, each offering distinct benefits that will best serve certain classes. You'll be spending Hero Points as part of character creation, further modified by which of the five unconventional lore backgrounds you choose which define the strengths and weaknesses of your starting stats.

"There will be a point where it is mandatory to select a second class, but by that time, there's no way you would've been able to fill out all of the slots on your initial class' tree," explains Matt Cox, Creative Director on Tiny Tina's Wonderlands. "So for the rest of the game, you can get some of the benefits from your secondary class, but still spend all of your hero points and skill points on the things that best complement that primary class. You're not locked into having to spend skill points on the secondary tree; you still have the utmost freedom to spend those points how you wish."

Although focusing on one class is viable should you so choose, being able to craft your own hybridized hero by skilling into both of your Fatemaker's two classes is where your full potential can be unlocked. There's a bounty of skill combinations and synergies to explore, leading to entirely unique playstyles depending on your class choices. How will you refine your build and become the ultimate adventurer? 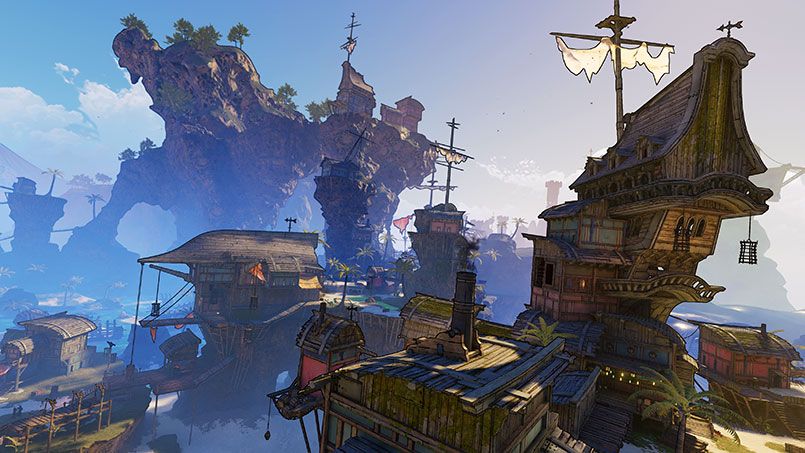 Bringing the world into being

Just as every tabletop campaign begins as a blank piece of paper, every landscape in Tiny Tina's Wonderlands started as an empty void. But thanks to the power of imagination, diligent artistry, careful attention to detail, and an ample supply of oh-so-sugary drinks, Tina's vision of a chaotic fantasy world has taken shape. There's so much sightseeing to do throughout the Wonderlands, whether you're cavorting through the sunny streets of Brighthoof, admiring the rampant fungal growth of the Weepwild Dankness, or taking in the lush tropics of Crackmast Cove. But long before these screenshot-worthy vistas became destinations on your map, they—along with other areas of Tina's chaotic fantasy world—were simply an assortment of giant grey boxes.

"We'll make what we call 'vignettes,' little art test maps that help us determine scale and what environments should feel like," explains Brad Sierzega, Lead Level Artist on Tiny Tina's Wonderlands. "There's a level artist and a level designer working on each environment from beginning to end, both feeding off of one another, giving each other feedback, and elevating one another to make the final product. We start by blocking out a map with simple shapes—no final art of any kind, just for figuring out scale-to-map, overall major combat areas, or unique points of interest. We're fleshing out a very basic, high-level, playable state of a map where you can walk from one end to the other and feel the scale of what you're building."

From the onset, figuring out all the different biomes that make up the Wonderlands was a collaborative process, involving level designers, level artists, mission design teams, and beyond. "Early on in development, we did an internal survey where everyone could pitch ideas for what environments they wanted," says Brad. "If the demand was there, and there were enough people who were passionate about something, we found a way to make it work. I think that we have a good balance that includes the typical trope environments you'd expect from a fantasy world, but we've put our own spin on them that make them different from what you'd usually see. Tina's got her own twist to everything, y'know?"

Plotting out a zone that has just the right pace for the size of the space is a delicate balancing act. "We want to make sure that the combat, the beat points, and the minute-to-minute gameplay are solid without too many lull moments, but we can't have so much packed in that it's just combat all day, nonstop," Brad notes. And entire areas can be reworked to accommodate new ideas that get the team riled up, even late in development. "It's not uncommon for a mission designer or someone else to say 'Hey, I really need an area for this crazy idea I have,' so we'll find a way to either utilize existing spaces that we're already thinking about, or find ways to add in new, additional areas that weren't originally part of the plan," says Brad. "It's all a collaborative process, and really anyone can push for those ideas." 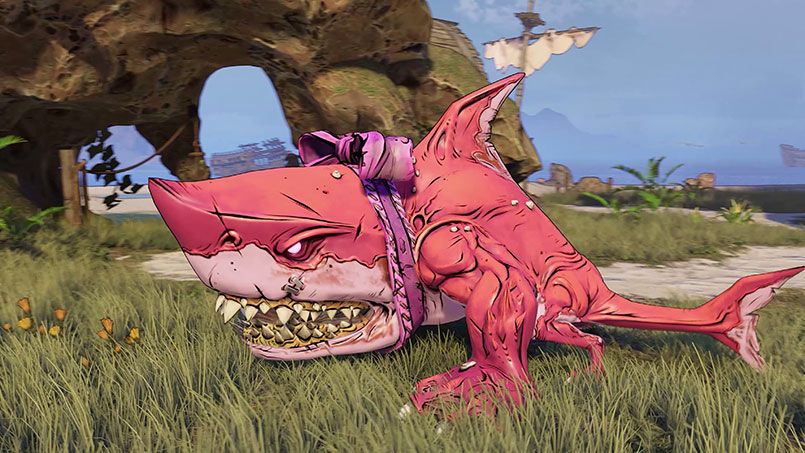 A world without worthwhile quests is like a treasure map with no X or a chest without loot: it won't hold your attention for long. That's where mission designers and narrative writers swoop in, populating the Wonderlands with all manner of heroic undertakings, stirring sorties, and profitable side hustles. As with its environments, quests you encounter in the Wonderlands were born from a collaborative process across multiple teams. "We don't mandate the story flow—everyone can pitch stuff, like 'Oh, this would be a funny idea, let's try it,'" explains Sam Winkler, Lead Writer on Tiny Tina's Wonderlands.

Said pitches can manifest as elements of main story missions or side quests alike. "For example, there's the Ballad of Bones, a main mission where you have to help this skeleton pirate, Bones Three-Wood. There are sea shanties in that mission, all because one of our mission designers got really into sea shanties," laughs Sam. "We were like, 'OK, how do we write and record and integrate sea shanties into our game? We haven't done an in-game song before.' That was a unique challenge, but it all stemmed from the mission designer just going 'I have this idea.'

Not every pitch can make the cut due to time and resources, but the quests that do make it onto Tina's docket exist to further flesh out the world. "For each quest, we ask: is it making the Wonderlands feel like a living, breathing place with people who inhabit it, who don't think about the evil Dragon Lord sitting atop The Fearamid?" says Sam. "He's not their main concern—they're worried about some goblins in their garden, or walking their pet landshark, or so on. The writing team has this bird's-eye view of the whole world, the whole story with all its characters, making sure that—whether it's a one-shot side-quest or part of the main questline—it feels woven into the fabric of the Wonderlands universe and feels real in that space." 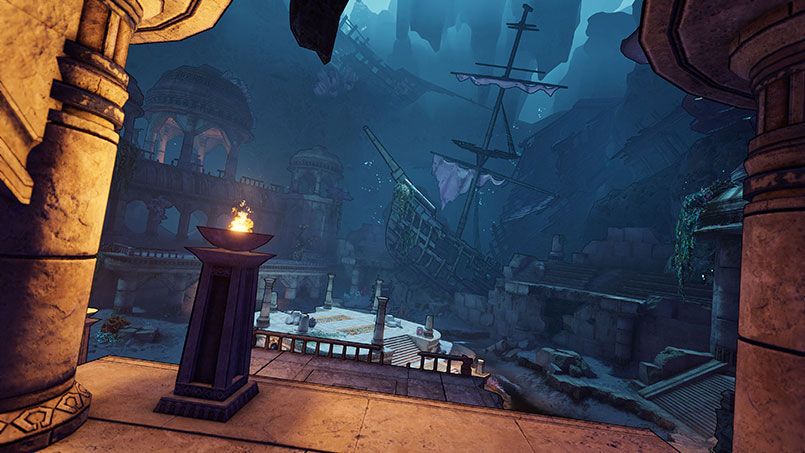 That same focus on making each zone feel believable within the realm of the Wonderlands extends to level art. "We want to make all the environments feel lived-in and feel inviting for the player to be in," says Brad. "We put a lot of effort into trying to tell a story: 'What was once here? Did someone live here? What was their life like and what is it now? How have the events of what's going on around you affected the world that was once there?' We want every environment to feel like it's a new place you've never been to, and that there's always something worth seeing and exploring in your surroundings."

If you look carefully to the horizon, you'll often catch glimpses of maps you've visited before, or faraway points of interest that you might eventually get to set foot upon (including entirely optional regions like the Tangledrift, as discussed in Dev Diary #1). "We wanted to make sure that you get a sense of progression and really see how the world is connected from one map to the next," says Brad. Depending on how far you are in the main questline, you might even end up transforming entire sprawls of the Wonderlands. "At certain points, if you do go back to previous maps that you've been to, you may see some changes," Brad hints. "That's something we really cared about: showing how your progression through the story impacts other maps, whether that's a small visual detail or opening up new playable areas. We really wanted to convey that the player has an effect on the world and there are rewards for exploration." 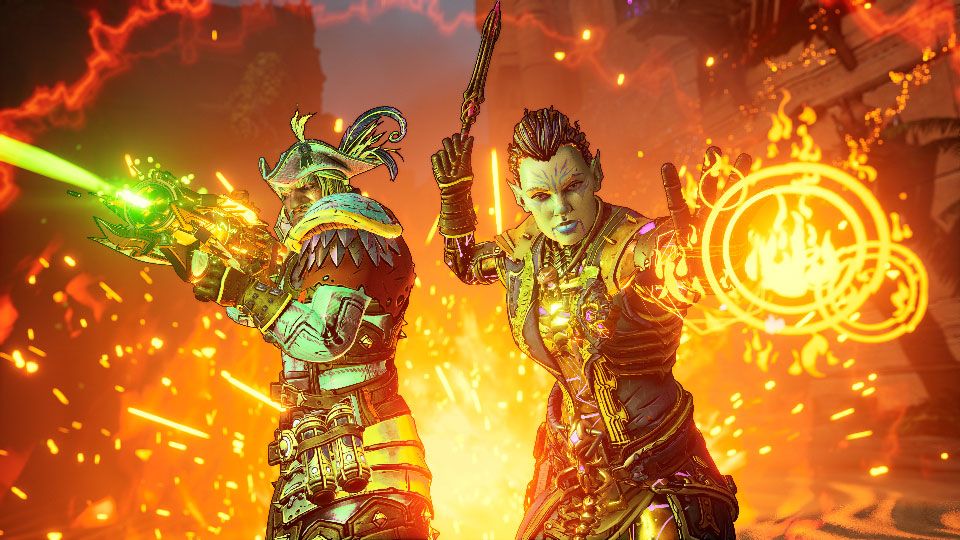