Stabbomancers are sneaky, Critical-hit-focused assassins who summon magic whirling blades to the battlefield and disappear into the shadows at will.

Look, Stabbomancy isn't really its own school of magic—it's a way of thinking. Specifically, "How do I stab that guy?" Up close with a dagger in the dark? A well-aimed bullet from afar? Or even an ethereal psychic ghost sword? The thing is, Stabbomancers are all about creating, and capitalizing on, opportunities. Jacks of all trades, masters of none, the skillful Stabbomancer exploits foes' weaknesses to stealthily strike vital targets to bring enemies down before they know what hit them.

The Stabbomancer specializes in Critical Hits and Status Effects. They're able to keep enemies guessing by alternating between Guns, Melee Weapons, and Spells, all the while moving in and out of stealth to score guaranteed Critical Hits. Though fragile, the Stabbomancer can use their superior speed to evade damage and fire their guns while sprinting. 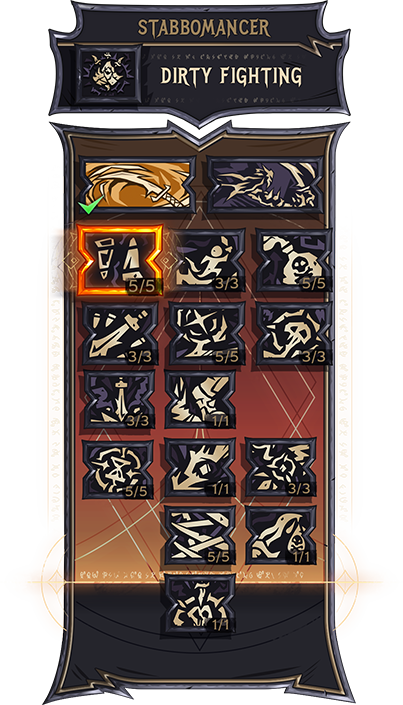 The Fatemaker throws out a Ghost Blade which spins in place at target location, dealing Melee Damage periodically to nearby enemies based on the Fatemaker's equipped Melee Weapon.
Pressing the Action Skill Button while Ghost Blade is active causes it to teleport to the targeted location and reduces its remaining duration by a small percentage.

The Fatemaker enters Stealth, turning Invisible. While in Stealth, all damage dealt is automatically a Critical Hit, but Critical Hits deal reduced damage.