Get to know the Spellshot and Clawbringer classes for the Fatemaker in the newest Welcome to the Wonderlands trailer above!

As the world's premier Bunker Master, Tina is keenly aware that a bodacious roleplaying session is about much more than the setting. It's not enough to craft a whimsical realm like the Wonderlands and call it a day. A chaotic fantasy adventure means heroes banding together; epic weaponry and powerful magic; endless forces of evil led by a diabolical villain hellbent on ruling the free world!

Tina's got her capricious campaign mapped out, putting you smack-dab in the middle of it all as the Fatemaker who must save the queendom from certain doom. She's set the stage and the stakes, but you're the one who's going to save the Wonderlands.

Pull up a chair for another installment in the ongoing series of Tiny Tina's Wonderlands Dev Diary articles, packed with insights from the developers who crafted every last detail of the Wonderlands. This time around, we're getting to know your fellow players seated around Tina's table, the big bad Dragon Lord standing between you and victory, and the high-powered weaponry that'll help you take him down for good.

As with many tabletop games, roleplaying in Bunkers & Badasses is not meant to be a one-on-one affair. After all, quests really come alive when you've got a group of adventurers with their own aspirations and attitudes that can sometimes be at complete odds with one another. In Tiny Tina's Wonderlands, you've got two such tablemates eager to get you on their side: Valentine and Frette, two shipwrecked travelers who leapt at the chance to join Tina's unpredictable campaign.

"Tina is omnipresent," says Sam Winkler, Lead Writer on Tiny Tina's Wonderlands. "She's everywhere in the game; with everything you do, it's implied that she's helping you along or responsible for what's happening. And we understood that if it was just you and her, it might get a little stale."

To embolden you on your adventure, Valentine and Frette are right there reacting to whatever Tina's thrown at you this time, and they've typically got wildly differing opinions on the best course of action.

Valentine might be unfamiliar with the rules of B&B, but what he lacks in actual game knowledge he makes up for with sheer bravado and cavalier courage, self-important as it may sound. Frette is the polar opposite: a power gamer who knows the ins and outs of B&B, eager to min-max her character to become an unstoppable killing machine with a reckless disregard for roleplaying. Both will offer up myriad suggestions over the course of your adventure, and your choices will either delight or disappoint them accordingly.

"Frette and Valentine are not your masters; they're not making you do anything," Sam explains. "Ultimately, you are the Fatemaker; you are the one who makes the choices. Frette and Valentine might have ideas; they might have nudging suggestions at times; they might even approve or disapprove of what you're doing. We wanted to use them as sources of levity, and as ways to address these different dynamics between players and each other, and players and the game master, and just generally try to provide people with as much running commentary as possible."

Having Frette and Valentine act like the angel and devil on your shoulders captures that unmistakable magic of boisterous roleplaying with a group of friends in person—something there's been happening a lot less often ever since the real world was changed by the COVID-19 pandemic.

"I remember discussing our thematic goals with the team back in the summer of 2020, a time when we were all feeling very disconnected, extremely far apart," says Sam. "Everyone was looking for different ways to try to stay in contact with people—not just through work, but in life. And across the board, something I've heard from so many of my friend groups is: 'We started playing tabletop games online.'

"This sense of disconnect for a lot of people was helped or healed by tabletop games. With the story of Tiny Tina's Wonderlands, we wanted to talk about the strength of tabletop games as a connector, and show our heroes as this group of friends who might disagree and want to do different stuff, but they're still playing the same game, and they all want to experience it together. Having those conflicting goals sometimes results in stories that no single person at that table could possibly have predicted." 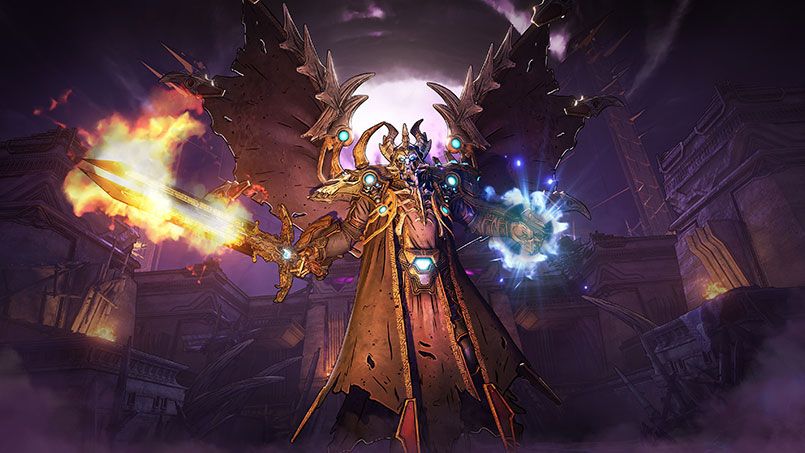 DOWN WITH THE DRAGON LORD

Every great adventurer needs to test their mettle against a mighty villain, so Tina's pitting you against her most tried-and-true big bad: the Dragon Lord, a powerful necromancer with a serious chip on his shoulder (proverbially, of course—his miniature is in pristine condition). "The Dragon Lord is a lot of different things," says Sam. "At first, he feels like the 'world's most generic villain,' which is the reason why he's even called the Dragon Lord—it sounds like something from a random name generator. As you play through the story, we want to peel back how he became that way, and why Tina would've designed him that way."

For all the times that Tina helped adventuring parties clobber the Dragon Lord and foil his schemes, he's still determined to break the cycle of defeat and flip the table in his favor. "We wanted to be sure that it makes sense why he's a villain in this world, and the turn on that was giving him a little bit more self-awareness," says Sam. "He's one of the few guys in this in-world game universe that recognizes 'Hey, I'm part of a game universe.' He's got this pretty contentious relationship with Tina. I'd be lying if I said there wasn't part of it that was me as a writer trying to have a conversation about my relationship with the characters that I make." 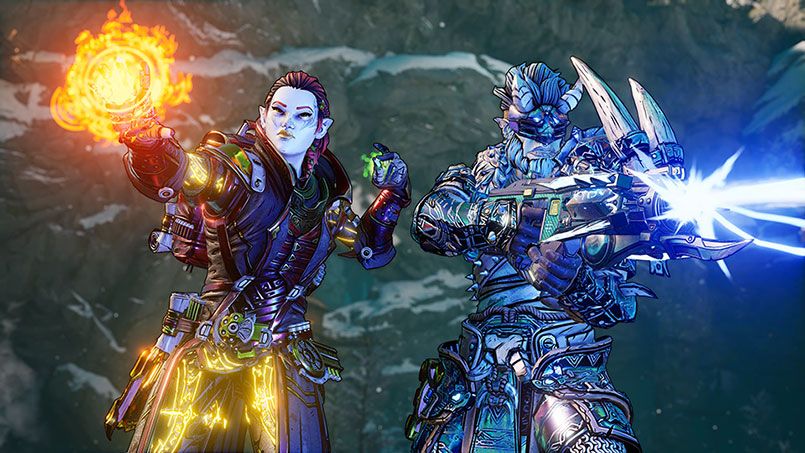 If you want any hope of even making it to the Dragon Lord's domain atop The Fearamid, you're going to need guns. Lots of guns. Firearms are your primary way of dealing damage to the many monsters you'll encounter in the Wonderlands, because we're playing by Tina's rules and she wants bullets flowing freely across the battlefield. Like death-dealing snowflakes, it's all but impossible to find two guns that are exactly alike, as each one is constructed from a huge array of interchangeable components.

"We have a pretty extensive gestalt system where the gun pieces mix and match with each other," says Asia Hawkins, Lead Weapons Artist on Tiny Tina's Wonderlands. "We want to emphasize big reads, and we try to include a mix of realism and stylization. We make sure we have a really good silhouette, then go from there. We don't usually say 'this is too over-the-top.' Especially in this universe, the more over-the-top, the better."

Chief among the many gun variables is its fantasy manufacturer, each with their own iconic traits like high rates of fire, huge explosions, or alternate modes of doling out destruction. As you'd expect, a gun's rarity greatly determines its efficacy; the better the gun, the more likely it'll have added damage types as well. One particular firearm trait that's a favorite among the developers is something embodying the chaotic fantasy of Tiny Tina's Wonderlands: the crossbow attachment for pistols, assault rifles, and sniper rifles. Who cares about practicality when you can affix an arrow-launching contraption onto your big ol' blaster? "When things don't quite make physical sense, we like to say 'It's magic,'" Asia laughs. "That works for this game because it's all about magic." 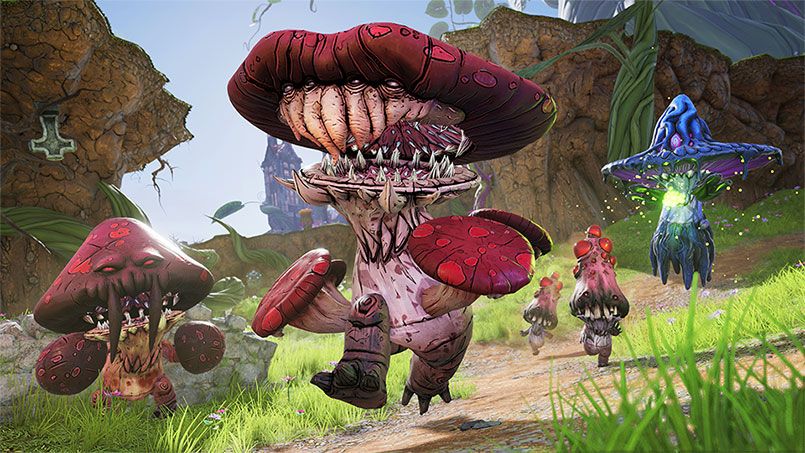 Guns, spells, and melee weapons get all the glory during combat, but your loadout of wearable gear has a huge impact on your character's strengths and utility. Wards are crucial to your survivability thanks to their shielding magic with a wide assortment of bonus effects, and accessorizing with Rings and Amulets will further boost your desired stats. In between skirmishes, you'd do well to jump into the item viewer and take a closer look at the visual splendor of all your fantasy finery.

"Wards in particular are really cool, and a lot of work went into those," says Asia. "There are five different kinds of design themes to wards. Some of them are more hard-surface-y, some of them are more organic. They all have a general theme, accentuated by stat boosts that go with that theme. Some look like the Necronomicon, with a creepy mix of skin and bone. Others have more of a steampunk vibe, with gears and copper and springs and all that—you can see the inner workings of them. Some follow a poisonous plant type vibe—mushrooms and vines and gross toxic stuff."

That attention to detail extends to all aspects of the Wonderlands, especially when it comes to spellcasting effects. "The effects that we do go through many iterations; very rarely will you see something onscreen that was just made once," says Ashley Lyons, Lead FX Artist on Tiny Tina's Wonderlands. "Being able to hit that 'wow' factor of 'I want to throw this out and it's going to be cool every time I see it'—that awesome spell probably went through four or five different rounds of feedback from the entire team."

Of all the effects he worked on for Tiny Tina's Wonderlands, one design that's near and dear to Ashley's heart are the many portals that will transport you through levels of the multi-stage Caves and Dungeons. "At first it just had a lot of cloudiness and lightning crackles around it; it was darker and looked evil," he laughs. "Seeing that design develop over the months and months of work going into it, and just seeing where it started versus where it ended, with all these subtle swirling effects—that would be one of the flashier things that I am personally proud of. I was able to make it look three dimensional from the front, but when you walk around to the back of the portal, it's flat."

Spell effects also have to be designed with co-op in mind. "When we're creating spells and effects we want to go all-out, and we want to throw as much cool stuff as we can into that one spell," says Ashley. "From a technical perspective, now that so many things are magic-based, we can incorporate more of those curl noises and vector fields in our particle systems that we didn't get to use as much in the past. Using all those GPU sprites helps give a wild look to all the spells. Once we get that initial look, we might pull back visually just a tad bit so you don't have four people doing the same thing and end up with this visual vomit all over the place, so to speak. You've got to find that balance of 'Does this look cool?' versus 'Will it play?'"

When Tiny Tina's Wonderlands launches on March 25, 2022, you'll be able to sit down at the table with Valentine and Frette, attempt to defeat the Dragon Lord, and fire off fantastical guns and intricate spells to your heart's content. In the meantime, stay tuned for more Dev Diary articles and updates to the Tiny Tina's Wonderlands Game Guide ahead of your epic journey into the Wonderlands! 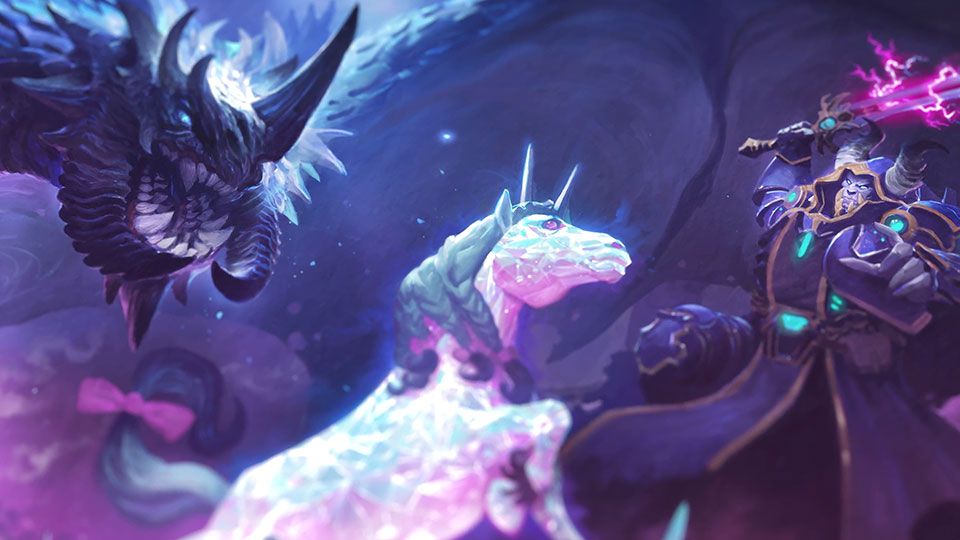 Meet the main cast of Tiny Tina's Wonderlands and prepare to take on the mantle of Fatemaker! Experience the first foray into the Wonderlands as a standalone campaign! 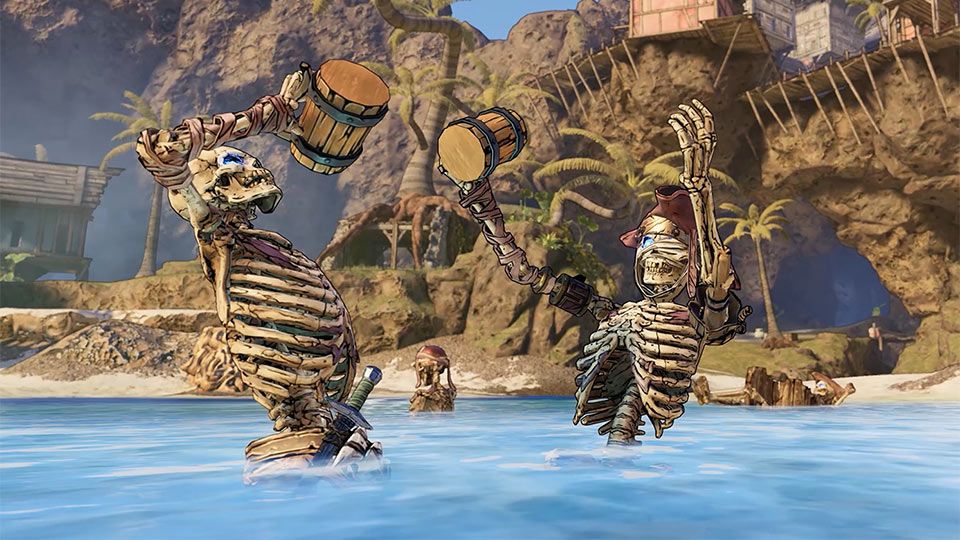 Get the inside scoop from the developers on the Overworld exploration, enemy encounters, and more!